MRI is a very powerful and safe medical diagnostic tool, but it is prohibitively expensive to use frequently. Hence, a technique that speeds up MRI acquisition would not only be helpful for patients, as it requires them to lie still for shorter periods of time, but it would also be of great benefit for doctors, as it leads to a higher patient throughput and a reduced susceptibility of the images to motion artifacts. Using Quasar, Jan Aelterman and his colleagues developed a reconstruction algorithm that handles acquisition speedup correctly.

Speeding up MRI is done by reducing the amount of acquired data. However, signal processing theory states it is impossible to do this beyond the Nyquist limit, without losing information. However, it is possible to only lose superfluous image information, this is called compressive sensing (CS). The danger is that that a naive reconstruction technique inadvertently corrupts an image while filling in lost information.

An MRI image is constructed from so called Fourier, or k-space coefficients. Due to acceleration techniques, the number of Fourier coefficients is less than the number of image pixels, resulting in an infinite number of possible images that would correspond with the acquired Fourier coefficients (an infinite number of ways to fill in the missing, superfluous information). Therefore, we impose an additional constraint: the reconstructed image is the one with the lowest number of shearlet coefficients possible. The shearlet transform can represent natural images with few coefficients, but not noise and corruptions. It is optimal in this respect. Hence, its use will force a noise – and corruption – free reconstruction. The optimization of the proposed problem requires iteratively applying the Non-uniform fast Fourier transform (NUFFT), which after profiling turns out to be a major bottleneck. By accelerating the NUFFT using the GPU we are able to gain significant speedups. 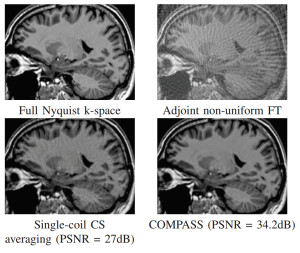 COMPASS reconstruction experiment using 4 acquisition coils and 10% of the Nyquist sampling rate on a k-space spiral.

Implementation was done using the new programming language Quasar, which allows for fast and hardware agnostic development, while still using the computation power of the GPU. Without requiring long development cycles, we were able to achieve speed-ups up to a factor 20 on an NVIDIA Geforce GTX 770. The speed-up achieved by the GPU acceleration opens the path for new and innovative research for MRI reconstruction: e.g. auto calibration, 3D reconstruction, advanced regularization parameters, etc.